By Vince Ganzberg, Director of Education for Indiana Youth Soccer, proud member of US Youth Soccer

"Mom and Dad, I don't want to play anymore!"

After investing the time and money into any sport, this is the last thing a parent wants to hear, but it happens.

Children quitting organized sports occurs more often than one might think. Research has shown that approximately 70-75% of children will quit playing a sport by the age of 14.  Why do they want to stop?  To answer that question let's look at why they start or why parents put their children into a sport in the first place.

2. Affiliation (Being a part of something like a team or a club)

4. Fun (This is the overwhelming reason why children play sports)

Notice that "winning" is not one of the reasons.

When children leave a game, they want to know two things: 1.) When do we play again? 2.) Where is the snack?  Children are not as concerned about winning as adults may think. Children all want to compete, but they each have their own interpretation of competitiveness.  For most, if one team is red and the other is blue then "game on."  Children strive to do their best when they step into "competition."  They also want competitive matches.  Remember when you were a child playing in the backyard and the game was too lopsided?  What did you do?  I remember stopping those games to start a new one with different teams or balance the game out.  I think many of us forget what emotions we went through growing up as a child and how we viewed competition.

Let's get into why they stop. Research says children stop playing sports for a variety of reasons.  Six of the seven primary reasons are "ADULT CONTROLLED" behaviors.  Can you guess which one isn't?

If you guessed "Other activities are more interesting" then you are correct! Give yourself a pat on the back.  There are times when a child just finds something new that they really like.  The rest of the reasons are adult controlled behaviors.  When adult controlled behaviors are forcing children out of a sport, adults are putting themselves before the needs and development of children.

Lack of Playing Time
This is an adult controlled behavior due to the coaches and parents wanting to "win" the game.  Do players want to win? Absolutely!  They all strive to do their very best to win. Research has also shown that children today would rather play than sit the bench for a winning team.  Allow your players to play in the game for their own sake.  As a coach you need to see their "soul" on the field and allow them to get into the game so they can get better.  Not putting children into a game is like not allowing them to take a test in school.  There is nothing wrong with having some players earning more time, but all players should be given a minimum time to play.

Overemphasis on Winning
"Winning isn't everything, it is the only thing".  That is the famous Vince Lombardi quote which was also misquoted.  He actually stated "The will to win isn't anything, it is the only thing".  So many coaches feel as though their whole self-worth is out there on the field, and if they don't win as coaches, then "they" not the children are a failure.

The same goes for adults on the sidelines.  A recently statistic showed that 25% of coaches quit due to adult expectations with regard to outcome.  The late Bill Walsh stated that "Twenty percent of every game is by chance."  In the 1980 winter Olympics, the Russian hockey team would have probably beaten us 9 out of 10 times but that day, it was America's day to win.

As a coach or parent, you can't control the outcome.  If it is the other team's day, it's simply their day!  Only two teams need to win in our country, and those are our Men's and Women's national teams.  Soccer is a team sport that is "player" driven - once the ball starts rolling, there is nothing people outside the lines can do.  Give them the game, and let them determine the outcome!

Lack of Fun
Children view sports differently than adults.  Most children, if not all, start playing a sport because it looks fun.  There is a saying "Get them playing-keep them playing."  Get their interest and then maintain it.

There is also a saying that "Drills destroy skills."  No lines, laps or lectures.  Soccer is a free flowing game where the players make decisions and decide the outcome.  Instead, use training sessions that put players in an environment where they can make decisions and maximize touches on the ball.

As Director of Education traveling around the state, I am always surprised at how many coaches use the age-old practice plan starting with "laps."  Coaches and adults need to know that endurance training is only effective at 12 to 18 months after PHV (Peak Height Velocity), which is about 13 years, 6 months for boys and 11 years, 6 months for girls.  For the younger ages (6-10 years of age), you can work on their fitness (not just endurance) with the ball, rather than running laps.

"Teach don't talk."  Our children live in a very busy world today.  As a result, the ability for them to listen to coach talk has declined. Teach them in training, but make your points short and sweet.  Also, include them in the process of learning by asking them questions on the topic you have for that training session.

Finally, let them play!  "Over the past two decades, children have lost twelve hours of free time a week, including eight hours of unstructured play outdoor activities.  The amount of time children spend in organized sports has doubled, and the number of minutes children devote to passive spectator leisure, not counting television but including sports viewing has increased fivefold from thirty minutes to over three hours," (Elkind, 1).

It is a different world we live in now. As a coach, you can give them some of that "free time" back by allowing them to play as soon as they arrive.  I observed a club who does this, and their players are begging their parents to get them to training early because they know they get to play the game at the beginning.  The game is the best teacher; so as a coach, allow them to play and express themselves and to have FUN!

Coaching/ Adult Behaviors
For some reason, some adults and coaches transform from Winnie the Pooh to a grizzly bear when a game rolls around. Everything from yelling at officials' bad calls to conversing with parents from the other team is widely seen throughout youth sports. Remember this - without referees, there is no game!

Put yourself in someone else's shoes.  Imagine that your child (who is a new referee) is getting verbally abused by adults because a hand ball was not called during a U6 match?  As a parent, you have taught your children to be respectful of their elders and to give their very best on the field.  Verbal abuse of the officials on the field leads to referee loss.  Did you know that nearly 75% of the referees in Indiana are under the age of 16? We must provide a tolerant, respectful, safe environment for these referees to use as a training ground, and it starts with each and every one of us.  It takes a village to raise a child, whether they are players or referees.

Be a role model for your child. Try to view a game like a "grandparent." They just want to go and see their grandchild be happy.  Let's take a lesson from this.  They have been there, done that. Experience is a great teacher.  As a parent you want to see a child's "soul" when they are out on the field and not just their face.  Kids can only play freely when we, as adults, allow them to control their own destiny.

The numbers don't lie, only a small percentage of players will go on to play in college, and even fewer than that will play at the professional level.  Refer back to the reason why you enrolled your child in a sport in the first place.  I am sure for the majority of you; it was for one the four reasons at the beginning of this article – competence, affiliation, fitness or fun. Please remember that your child is not you!  Your childhood is over - give your kids the game.

Dissatisfaction with Performance
Stay away from "PGA" or Post Game Analysis in the minivan/SUV after the match.  Coaches, stay away from the "PGA" closing statements after a tough loss.  Children remember this, and feedback isn't always what they want to hear.  Children know when they make a mistake in a match. Repeating it again verbally isn't the answer.  Try to shift gears and turn a negative into a positive.  Let it go, and make sure that they know you still love them no matter how many mistakes they make.  There is a reason why the X Games are popular with children.  The most prevalent is that they can determine their own outcome, be creative, and make mistakes, without anyone analyzing their performance.

Lack of Social Support
There is "tough" love and there is "TOUGH" love.  Most athletes that make it to the next level mention their parents gave them "tough" love but were supportive of them every step of the way.

This actually ties in with dissatisfaction of performance.  Be there for your kids through the tough times and the good.  It is easy to be supportive of them after a victory, a game winning goal or an important save.  Remind your children that tough times don't usually last, but tough people do.  When children feel abandoned by their parents/coaches that is when they often go to something else. Sometimes, that something else isn't a positive activity.

We all can help create a better environment to make sure that children begin playing and keep playing, staying active, keeping healthy, and making them lifelong participants in athletics. 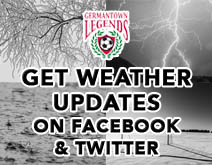